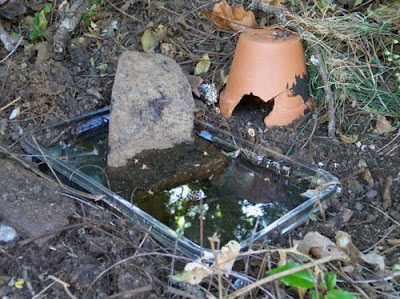 What the heck is this mess, you ask yourself? No laughing as I invested a bit of time into it, but it is a supposed to be a frog's sanctuary. Okay, I'm a dork, I know! So a few weeks ago while driving, my hubby found a pond with a ton of tadpoles on the side of the road and he brought one home. You can see it in a previous post in a glass vase. Well, the time came to let "Frogger 2" go. I know, super creative name, yes? I got Matt a little itty bitty frog for our aquarium last year, aptly named Frogger... so the new one became "2". I actually tried to keep him longer and tried feeding him nightcrawlers, but he was more freaked out by them than anything else. I had a brilliant idea to make a little pond with a rock to perch on and a little house so that he would stick around and eat bugs for us - organic bug killer! I had read somewhere that pots turned over make great houses for frogs and if you speckle them around your yard, they'll live in them during the day. I had Matt punch out a hole in one of our pots to complete our frog's sanctuary. We had him in the makeshift pond with a lid over it overnight so he'd get acquainted with it and his new surroundings. The next morning we popped the lid off and let him be. After I finished shipments and went out for a look-see, he was gone. Actually, it's as if he couldn't get away faster. Hahaha! Oh well. *sigh* I thought his "home" was pretty wicked.

And a few pictures of the garden: 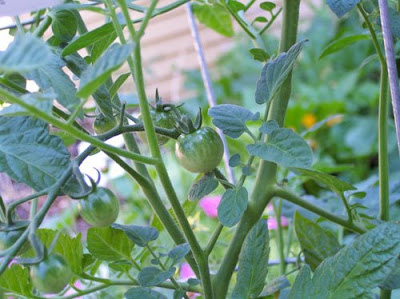 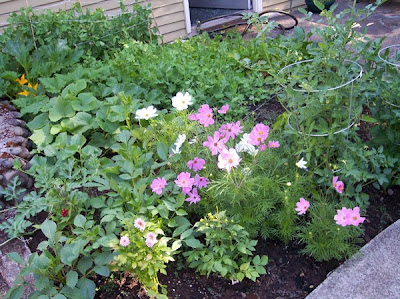